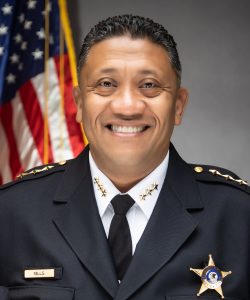 My name is Thomas Mills, and I have the privilege of serving as Chief of Police for the Village of
Broadview. I was born and raised in the City of Chicago, and served on the Chicago Police Department for 32 honorable years, retiring as the Deputy Chief of the Bureau of Counter-Terrorism. My numerous roles also included positions in the Bureau of Internal Affairs, Bureau of Detectives, and Bureau of Organized Crime.

I also had the privilege of working on numerous federal task forces and other police
officers from various municipalities and cities and states, allowing me the opportunity to build professional relationships which have enhanced my ability to better serve citizens of the Village of Broadview.

The Broadview Police Department is comprised of 32 full-time sworn and civilian members, serving in Patrol, Investigative and Administrative Units.

Members of the Broadview Police Department are dedicated to the service of our community and will continue to pursue the trust and safety of all of our residents, businesses and visitors.

The Broadview Police Department actively engages with the community in various forms. From our Patrol Officer “Walk and Talk”, Neighborhood Watch, Citizens Police Academy, National Night Out, Coffee with the Chief and several other programs and events throughout the year.

Thank you for allowing me to serve you, and provide leadership to the dedicated members of the Broadview Police Department.